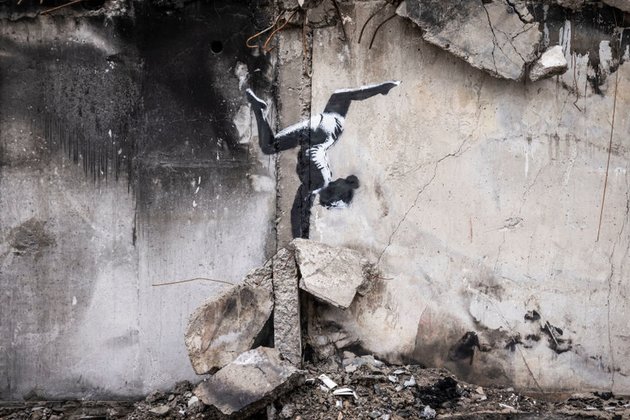 Legendary UK graffiti artist Banksy has rebuked Ukrainians for selling pieces of at least one of the seven murals that he created near Kiev. He revealed the new paintings earlier this week.

"Ukrainian vandals started selling pieces of my artwork without my permission on eBay," the anonymous Bristol street artist said in an Instagram post on Saturday. "I gave you art, and this is how you repay me."

The post included an apparent screenshot of an eBay listing offering fragments of a Banksy mural in the rubble of Borodyanka, northwest of Kiev, for $50 each. The ad notes that the price is negotiable and suggests that buyers may "transfer money and tell me which piece you want to repay $200."

The mural shows a gymnast who appears to be doing a handstand on a piece of rubble outside a bombed-out building. Banksy confirmed that he created the mural, along with six others, in a video that he posted on Thursday on Instagram. The post attracted more than 1.2 million likes. A photo of the gymnast mural had 2.2 million likes and more than 22,000 comments.

Banksy has been making graffiti art for decades and gained fame for satirical black and white portraits showing people interacting with the scenes around them. For instance, one of his murals shows a masked man hurling a bouquet of flowers at the barrier separating Israel from the West Bank city of Bethlehem.

The secretive artist has long bristled at unauthorized appropriations of his imagery, but he has lost copyright battles over his refusal to reveal his identity. Just this week, he encouraged his 11.7 million followers on Instagram to take revenge on fashion retailer Guess for its use of the flower-throwing man.